I believe in the spirit of giving back through the stewardship principles of Time, Talent and Treasure. My former career as a nonprofit director and the legacy of my parents inspire me to serve. Currently, I am the President of the Massachusetts Friends of Libraries. I am also the President of the Friends of the Millis Public Library and spearhead our annual fundraiser “A Novel Occasion.” In addition, I’m involved in my local parish, St. Thomas Catholic Church, and sing in the choir.

There are so many wonderful charitable organizations out there. Here are a few that I am passionate and care deeply about.

I urge everyone to give their time to the cause they care about. Give your time: Time is a very precious gift. Share your talent: Whatever your talent, share it so that someone who needs that gift is being served. Treasure: When it comes to financial support, charitable organizations need help. Give generously in whatever way you are able because in giving back we all are one. 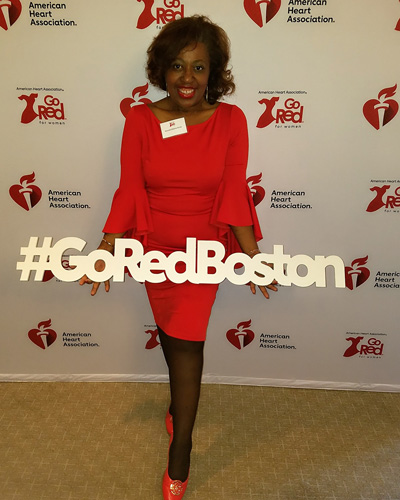 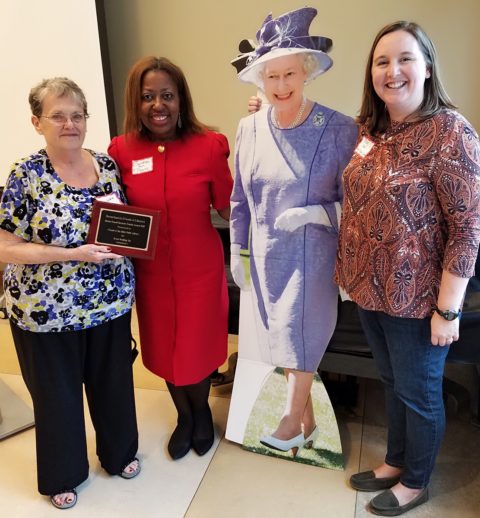 “Did your Friends group do something cool and unusual?”

That was the question the Massachusetts Friends of Libraries email had asked. The statewide group was seeking nominations for its Donna Forand Fantastic Friends Award for 2018. And the winner was, the Friends of the Millis Public Library, for its Royal Wedding Tea.

“I had gotten an email about this award. Sandra had actually mentioned to me she had seen it, and in talking about it, we thought it might be worth applying,” says Millis Public Library Director Kim Tolson, who officially nominated the friends group for the award.

Tolson and Sandra Elaine Scott, president of the Friends of the Millis Public Library, thought they might have a chance to win the award, because the Friends of Millis Library had held a Royal Wedding Tea event to celebrate the marriage of Prince Harry to Ms. Meghan Markle on May 19, 2018.

“This was a unique program which is outside the scope of what Friends programs usually do,” says Tolson. “We had a good response from the people that attended, and we thought other people might appreciate hearing about the event. It was a creative activity outside the normal book sales and bake sales.”

In fact, the Royal Wedding-viewing event featured a sit-down breakfast with china and cloth napkins, with donations by Roche Bros.

“There was no paper to be had,” says Scott.

Invitations to the event encouraged attendees to dress for the occasion, and many decked out in fancy attire, including elegant fascinators. Professional photographer Audrey Anderson provided a photo booth, and Twist Bakery even donated a wedding cake the exact flavor profile as the Royal Wedding cake, vanilla cake with lemon curd filling, drizzled with elderflower syrup with raspberry compote and elderflower butter cream. Best of all, guests could take photos on a red carpet with a cutout of Queen Elizabeth courtesy of Diane Hubbard.

“In fact, today I got an email from a woman who attended the event,” says Scott, who said the woman had inquired about whether the Friends were doing an event around a lesser publicized upcoming royal wedding. “That same woman, at the end of the event, she came up and thanked me,” says Scott.

Scott says she also received great local press coverage from the Metrowest Daily News. The photographer who came, she said, had researched all the different events taking place in the area related to the Royal Wedding, and chose the Millis event because it sounded “different and cool,” says Scott.

The event drew different kinds of people and comfortably filled up the Roche Bros. Community Room with about 50 people at 6 a.m. One trustee brought her daughter and daughter’s two friends, sure that they’d talk about the event years from now.

“We even gave little favors,” says Scott. “Twist donated cookies to put in the favors, and Trustee Wendy Barry gave us little things she’d gotten in London, little cool things and tea.” Paul’s Flowers even got into the mix, donating a crown as a raffle.

“A lot of time and planning went into it,” says Tolson, who adds that planning for the tea began in February, months before it took place.
“I had visions of grandeur!” laughs Scott. She adds that the Friends group pulled the gala off without a hitch.

“Before and after, it was just so much fun. Getting up at 4 and just to be made and dressed at that hour of the morning. There were so many helpers the night before to put the favors together, to set the tables, for the hors d’oeuvres,” says Scott. “Some of the Friends, people who had zero interest in the wedding, said they would come at the end. They came in like locust – at nine stripped the room down!

Scott explains that, in addition to the plaque, the Massachusetts award came with a stipend of $300 for the Millis friends’ group, and it also awarded $200 to the library.

“Our “friendraiser” was more of a community builder – something fun to do, but now we can say that it was a fundraiser,” says Scott.

The Friends of the Millis Public Library is an integral part of the community programming at the library, says Tolson.

“The truth is, the library has a set budget, and everything that’s not in that budget, we turn to the Friends. We don’t have any money in our budget for programming and museum passes,” says Tolson.

Dear Sandra,
Hooray for you!! And the Friends of the Millis Public Library!! What a fabulous job you all did. Wonderful that you got recognition AND won the award, and money too!!
Sandra, I just read the article in the Medway/Millis November paper.
Truthfully, the royal wedding event TOTALLY EXCEEDED any expectations I had of how the event would unfold!! From the moment we scurried in to get out of the cold and saw the photo studio set-up, to the walk down the red carpet, to being amazed and awed upon peeking into the Community Room which had been transformed into a truely BEAUTIFUL wedding reception venue, I was delighted by all of the efforts that had been made to create a blissful event!
The article fails to convey the ambiance!!! For me, to enter your wedding reception was unbelievable!!
The table arrangements, the cloth tablecloths and napkins, the oh, so fragrant Lily of the valley flowers on each table, the variety of teacups and saucers and plates and serving dishes, the wedding cake set up in the corner, the teapots and floral arrangements ALL, ALL contributed to the festive atmosphere and anticipation of the wedding to come!!!
I so reveled in the detail!!! Those lily of the valley flowers smelled Devine!
And in addition to all of that, there was delicious food and cups of tea and an oh so yummy cake! …..  Guests looked festive! ….. Prizes and wedding favors were dispensed ….. Photos with the Queen herself was a fun touch ….. And there was also THE WEDDING!!!!!
So very much thought, planning, effort, and fun went into the preparations.  I can appreciate the whole thing!
Sadly, the article failed to convey the extent of effort that went into the rich details that THRILLED the wedding guests!
But, I am thanking you and the Friends. It is a well deserved award. You earned it!!
BRAVO!!!
Kathryn Gould